Both Chilean and Russian economy are dependent on natural resources, with copper accounting for 48% of Chile’s exports and oil & gas accounting for 41% of Russian exports. Both countries have rank moderately across EM countries in terms of exports size relative to GDP and rank lowly in terms of manufacturing value added to its respective GDP. Manufacturing sector accounts for only a small part of both economies and the trend is worsening for Chile. Savings rate is at 19.5% and 30.1% in Chile and Russia. 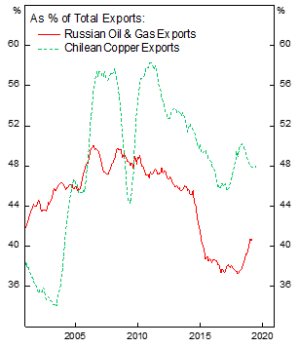 Chile has, however, a more developed financial market compared to the rest of Latin American countries and financial services are taking a greater share of the economy. 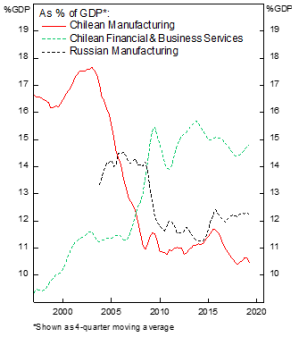 The dependence on natural resources, whose prices are dictated by global supply and demand, translate to high cyclicality of asset prices and currencies in both countries. Our expectation of global reflation means both countries’ asset prices are likely to benefit from higher commodity prices in the next upturn.

Inflation outlook is converging for both countries, but Russia is much more vulnerable to spike in inflation from currency depreciation and fluctuation in commodity prices.  The volatility in both countries’ currencies have pushed household to maintain a relatively high amount of foreign currency deposits compared to other EM countries.

In terms of economic progression, Chile has been investing in capital goods much faster than Russia when the base is much lower. This allows Chile to catch up with Russia in terms of output per capita, which now are comparable for the two countries.

Chile runs current account and fiscal deficit while Russia runs current account and fiscal surplus. This means that Russia has been accumulating foreign reserves compared to Chile, which leads to improving external profile. Their respective government bond yields, however, suggest otherwise. Chilean 10-year government bond is trading at 2.6% while their Russian counterparts is at 7%. This is partly because Chilean institutions and rule of law is ranking much better than the Russia’s. However, due to the sizable Sovereign Wealth Fund, Chilean net public debt is close to zero. 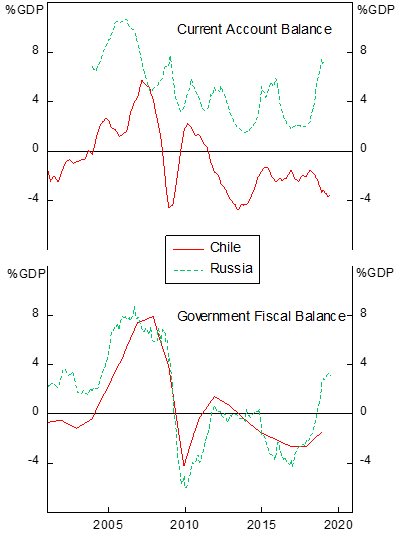 In terms of stock market capitalization, materials and energy sector accounts for 18% of total in Chile and 73% in Russia 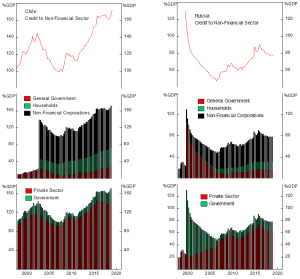