This week U.S. PMI data shows a significant slowdown in the expansion of U.S. economy (manufacturing PMI 50.6 in May 2019 from 56 in the beginning of the year), raising the odds of undershoot of earnings forecast of U.S equities and the associated impact. Combined with the escalating trade and ideological war between U.S. and China, business confidence and capital spending will be dented, resulting in a vicious feedback loop in the economy that has been experiencing decade of expansion. In this sense, we particularly dislike U.S. equities due to the relatively high multiples relative to world equities and the increasing probability that earnings will disappoint.

Unlike the pre-2008 crisis when the leading indicators are showing an abrupt deterioration, since 2015 we have been seeing a rather progressive slowdown in the pace of economic expansion. Various regulatory measures, such as Basel III, have been introduced that may smoothen the business cycle by restricting speculative activity and excess credit in the banking sector. Housing starts figure, which has been worsening since late last year, is a particular concern to us; major portion of the wealth of middle-income family in the U.S. is contributed by the house equity, hence a declining house price and large (>15%)  correction in the stock price will put a dent on consumer confidence and retail spending, which further depress corporate earnings. However, this does not mean that U.S. will have an outright recession, the cycle could bottom with growth hovering between 1.2-1.5% and picking up back to 2% trend thereafter. In this case, equity market may be flat with higher volatility for a more extended period before resuming its upward momentum until the cycle is picking up again.

Although we are having a more negative view on the U.S. equity, we are more constructive on other countries, especially those that have been hit hard by recession and in the process of bottoming in the economic cycle. Across 44 developed and emerging countries, we are seeing value that was last seen in the aftermath of 2008 and 2011. The green highlights are countries whose valuation metrics are below 30th percentile on a 5-year rolling basis, which is quite crowded today. Historically the world equity rally harder after such period (2004-20015 and 2009) and less during scarcity of green highlights (2013-2015).

We backtested a strategy of buying countries with valuation metrics below their 25th percentile and rebalancing the portfolio on a monthly basis, which unsurprisingly outperform the market drastically over the testing period (2004- April 2019). Return wise, $100 invested in January 2004 is worth $3670 (26.3% annualized return) today compared to $204 (4.8% annualized return) if invested in MSCI All Country World Index, an 18 times outperformance of the strategy. However, since the strategy is often overweight towards more volatile countries that are hit by recession or exodus of capital outflow, portfolio drawdown is greater than the benchmark at few times (2013 and 2015) over the testing period. We are aware, however, that valuation data from MSCI tend to get revised from time-to-time and expect this to reduce the strategy return somewhat but not drastically.

The strong result of the model leads us to the next question of what countries should we be invested in right now. Results are shown on the table below. Turkey and Argentina, two countries stricken by recession have been on our portfolio for a while now and we are doubling our positioning on Turkish equities as the Lira stay put and the earnings outlook improves. From risk allocation perspective, our position in Argentine and Turkish equities comprise 7% and 14% of our total portfolio risk. However, from an asset allocation perspective both positions comprise much lower percentage of total portfolio assets value due to our heavy exposure through call options. As of now, our Argentine and Turkish position has yield 4% and -6.7% return respectively. We see very little downside investing in both markets, as both of them has adjusted to levels seen in previous crisis.

However, we continue to monitor the risks closely: 1) Turkish low international reserves relative to its short-term debt 2) Political upheaval in the re-election of Istanbul mayoral vote 3) The delivery of S-400 missiles from Russia that could trigger sanctions from the U.S. Also, on the Argentine side, we have plummeting confidence on Macri’s government and the risk of Kirchner socialist policy bringing the country back to the path of destruction. From an economic point of view, both countries have recovered somewhat before industrial production correcting again of late due to risk-off events that trigger weaker currency in both countries. But the bar is so low that it is easy for both currency and equity to rally. Moreover, by buying at a depressed level, we have a wider moat in case of earnings continue to contract for prolonged period.

Among the list above, we are more constructive on Mexico, Colombia, U.K. and Japan, three of which we have been overweighting since the beginning of 2019 (link to January’s post). Meanwhile, we are downgrading our outlook for Emerging Markets overall, Korea, Brazil and Germany.

The charts below show the time series progression of our percentile model for several selected countries and their equity performances in U.S. dollar terms since 2004. 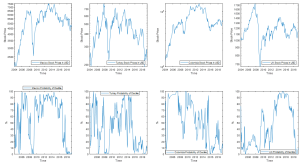 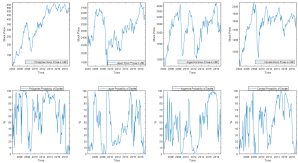 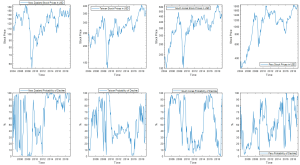 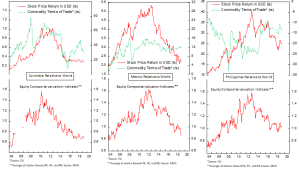 Bottom line: We hesitate to be outright bearish or bullish on the market and prefer to play the relative value trade for now. We have a positive view on several selected countries equity and maintain a net positive exposure towards world equity, but we are offsetting majority of the equity beta by shorting U.S. equity. We expect to gain alpha from both the long and short leg, although we will continue to monitor the development across issues: escalation/truce in trade war, global manufacturing activity, Chinese growth profile, Federal Reserves interest rate cut potential, among others. Our current strategy is to gain alpha from the relative value of equities across the world. Should the outlook improve for the U.S. market and our thesis was proven wrong, we may be forced to close our short leg to limit our losses.

From our observation of the FOMC statement, it seems increasingly likely that the Fed will have a policy mistake somewhere down the road this year, as Powell is maintaining is hawkish stance every time the market stop declining. It will inevitably result in higher volatility in the market and higher risk premium in EM and High Yield market. Early on May, we have been benefitting from our long call option on VIX at cheap price from our purchase in April, then reverse our position when the VIX hit 22 as a result of escalation of trade war rhetoric. 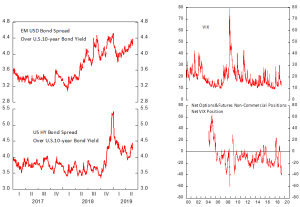 Currently we have a long put option on VIX with breakeven price at 16.24 and expires next month, a position that has tested our nerve during the past week despite its small size relative to our portfolio. We like playing with the volatility through option market as it limits our risk to the option premium that we limit to less than 5% of portfolio value.

On the currency side, we know that generally tight Monetary Policy and loose fiscal policy contribute to stronger currency, a case have seen so far occurring with the U.S. dollar. We expect this trend to continue for a some more time before we see stronger growth outside U.S. (Euro, Japan, EM), especially if there is a major correction in the U.S. stock market. By holding our cash in U.S. dollar denomination and diversifying our risky assets toward pro-growth equities, we hope to benefit from the Chinese reflationary effort and upturn of the cycle while hedging ourselves in the case of recession (barbell strategy).

We still like Indonesian bonds due to its high nominal yield compared to other EM countries and controlled inflation. Bank Indonesia, the central bank, is still err on the tighter stance of monetary policy, which should keep Rupiah and the inflation in check at the expense of potentially stronger growth and credit.

After the tumultuous post-election announcement riot last week, we see significant risk reduction on the political side that should decrease yield somewhat. Over the next year, we are forecasting that the 10-year Government bond yield to be around 6.0-6.5% range, giving a potential upside of 15-20%. 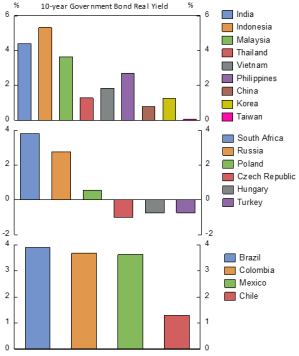