For the past three decades, Chile has been transformed from a typical problematic EM country into one considered as the safe-haven among EM universe. Inflation rate, currently at 1.7% YoY, is equivalent to developed countries standard and poverty rate has been slashed to 8.6% in 2017 from 45% in 1988. Credit rating agencies have also assigned favorable ratings for Chile, on par with a more developed countries such as China, Israel and Japan.

Investors mostly concur with this assessment. CDS spread on Chilean foreign-denominated government debt is pricing less than 0.5% probability of default and Chilean government bond acting as a safe-haven asset during period of crisis, contrary to majority of other EM countries (chart 1). However, due to dependency on copper export and China’s demand, Chilean economy is also one of the most sensitive to global growth, amplifying the volatility of economic growth and risk of capital outflow (chart 2). 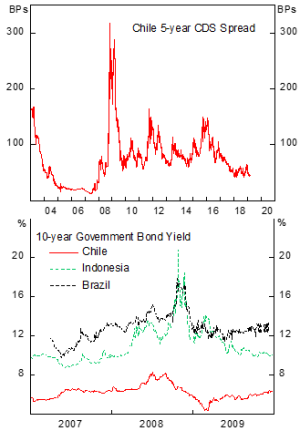 It is true that Chilean economy has slowly diversified from copper dependency and copper mining currently contributing only 10% of GDP, down from 21% at its peak in 2006. However, half of the country export is still dominated by copper sales and most of it are shipped to China (chart 3). Hence, in a global growth slowdown scenario, Chile would suffer proportionately more than other EM countries, and vice versa. As a very open economy, with trade to GDP ratio of 53%, Chile also feels the direct impact of strengthening and weakening export in its domestic economy, mediated by the Chilean Peso. A strong Peso would make its manufacturing exports less competitive, hurting the export-oriented manufacturing sector, a classic Dutch disease condition (chart 4).

The slump of copper price since 2011 has push Chilean government to increase its civil servant pay and subsidies as % of GDP to counter the weaknesses in private sector growth. As a result, Chilean government debt to GDP ratio has been rising and for the first time the country turned into a net debtor in 2017.

Chile has two large Sovereign Wealth Fund (SWF): 1) the Economic and Social Stabilization Fund (ESSF) with US$ 14.3 billion AUM (5% GDP) and 2) the Pension Reserve Fund (PRF) with around US$ 8.1 billion AUM. The goal of ESSF is to act as counter-cyclical buffer when fiscal revenues are low, reducing the need to issue debt. In 2009, for example, a quarter of government revenue is coming from withdrawal of the ESSF. ESSF capital is contributed from government effective surplus after contribution to PRF and Central Bank of Chile. Assets are invested in low risk securities. Meanwhile, PRF goal is to cover government’s future obligation to pensioners.

Chilean savings rate, although better than most of its neighbors, is much lower than the average Emerging Market standard. Boosting savings rate, hence investment, would enable Chilean companies to increase its productivity and lift the population living standard. At the same time, the country also needs to improve its education standard and increase R&D spending, to boost the quality of human capital. Currently, Chilean students score on PISA test and business sector R&D are significantly below OECD countries.

Chilean non-financial corporations have a natural hedging characteristic from its US$ export revenue, hence the subdued response to the 2014-15 Peso and copper price slump. Gross non-performing loans are trending lower since 2008 and banks have been provisioning heavily. Chilean banks capital is also composed mainly of the higher quality tier 1 common equity. The prospect of rebound in commodity prices and trickle-down effect to the rest of the economy should benefit Chilean banks the most. 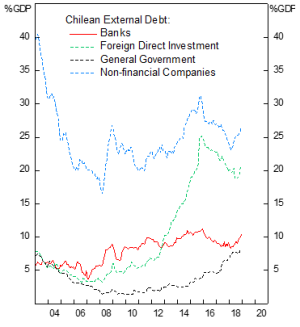 Granted, Chilean banks relative to benchmark is not trading at a discounted valuation, but the significantly higher profitability and robust balance sheet has translated to overperformance of the financials sector in the past decade.