In this post we highlight several countries equity market and their valuation that we found to be attractive to go long. The countries covered are Brazil, Canada, Germany, UK, Japan, Korea, Mexico, Russia, Turkey and the US.

From a cycle point of view, Brazilian equity is in a tough spot. We expect the economy to decelerate in the near-term and uncertainties from the pension reform bill, including spats between Bolsonaro’s family and politicians, are weighing down our assessment on the country. Although our quantitative model is recommending a long position in the equity, we are overruling this decision and stay put right now as we believe there will be a better entry point to buy the market.

Canadian equities have been lagging its world counterparts even as oil prices rallied. The manufacturing sector is showing a deceleration since the second quarter last year and has not shown an improvement so far. The slowing growth in the U.S. will be a drag on Canada and although we think the currency is cheap, we believe the relative growth profile is still more attractive for the U.S., which should drive the USDCAD pair higher. Moreover, flatter curve, weakening manufacturing activity and the drop in excessive property prices in major cities will be negative for the Canadian banking sector, which accounts for almost 40% of the index. 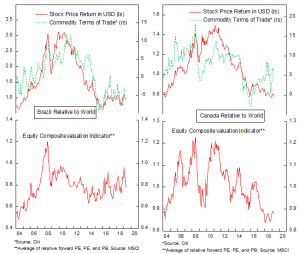 German manufacturing sector PMI has been declining in almost a straight-line manner since January 2018 along with the stock market relative performance to world equity, dragged by the policy tightening in China and weakening growth across the Euro area. However, we think that cycle is making a bottom and equities will further rally going forward. Should the outlook for Chinese reflation continue, as we expect, German bourse might be the greatest beneficiary among developed market countries.

British equity has been massively lagging the world since its peak before the 2008 GFC and the condition is worsened by Brexit just as the outlook started to improve back in 2016. The fear of a hard Brexit and exodus of firms leaving Britain to European countries have driven the multiples into level not seen since the GFC. We are seeing a deep value firms across British equities and believe the economy will continue its expansion after the cyclical bottom in October 2018. 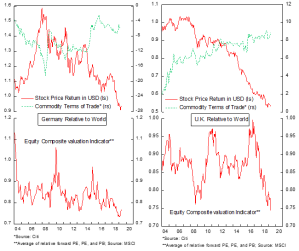 Japan’s manufacturing sector shows an improvement in April as Chinese reflation continues to take effects on neighboring countries in its supply chain (Korea, Taiwan and Japan). The country’s terms of trade are improving, and it looks like Japanese economy is making a cyclical bottom last February. With these cyclical factors in mind and cheap currency, we are trying to be more positive on Japanese equities, despite the prospective increase in VAT rate later this year.

South Korean firms are known for its conglomeration and poor governance, which most investors think justify the low multiples of the equity market. However, we believe the market will be re-rated in the medium term as its earnings improve after the recent huge drop. On the economic side, manufacturing activity bottoms in last February and has been rebounding sharply in the last two months as Chinese import demand has been stronger. 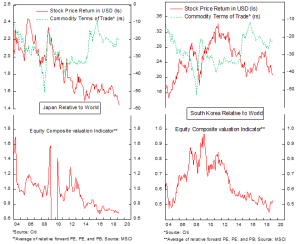 After recording a contraction in Q1, we expect Mexican economy to recover later this year. Several indicators are already showing early signs of improvement: industrial production, manufacturing business confidence and retail trade. Exports and imports, however, are still contracting on a year-on-year basis and domestic demand is still fairly weak. On itself, currently we like Mexican equities but are uncertain whether it will outperform the world equities at this point. For now, we stay put on the quantitative model’s assessment.

Our view for Russia is tied to our view on oil: increase in oil price has historically coincide with the outperformance of Russian energy sector relative to world and U.S. energy sector. Russian equities have always been cheap and round of sanctions on Russia has kept multiples stay low. We are seeing a broader recovery in the economy, especially in the second half of 2018, that will boost Russian equity’s earnings. Meanwhile, inflation is expected to remain anchored at 5% +/-1% and exports start to improve alongside increase in oil price. We believe the market has limited downside from current level and investors should focus on the volatility of Rubble when investing in this market. 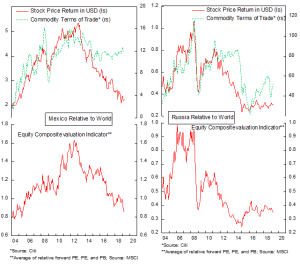 Despite still contracting, Turkish economic activity has improved somewhat, as indicated by the manufacturing PMI figure that currently stands at 46.8, 4.1 points better than its through in September last year. Banking sector NPL number is not showing signs of catastrophic stresses either: gross non-performing loans have been declining since March and Capital Adequacy Ratio (CAR) is at a healthy 16.4% in March. Cheaper TRY should give a boost to Turkish manufacturing goods exports and create a feedback loop to a stronger economy. Currently, most of investors’ concern lies in the declining reserves and Erdogan’s action regarding the result of regional election in Istanbul and Ankara, where his party lost. Despite these risks, we believe Turkish equity is a deep value play and will advance in the next 12 months regardless of the political outcome. However, we will continue to monitor the central bank’s reserve data to spot potential crisis brewing in the horizon.

U.S. economy has been stronger than most expect, and April’s manufacturing PMI data is showing an uptick to 52.6 from last month’s 52.4 figure. This may prove to be a short-term cyclical bottom in U.S. economy, like those in the third quarter of 2017. If this is the case, then U.S. equity will rally further as the expansion continues. However, we are uncomfortable with the high multiple U.S. equity is trading at, despite knowing that the FAANG stocks are driving tit upward. For now, we tend to avoid broad allocation to U.S. equity and prefer to go for a bottom-up approach when we saw value in some names. 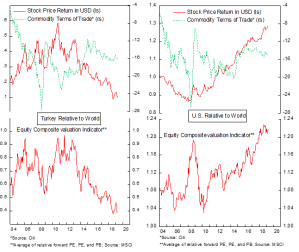