It is tempting to argue that we are currently experiencing the “manufacturing recession”, similar to the “commodity recession” we experienced back in 2011-2012 and 2014-2015. All the data is supporting the thesis that we did have a recession in 2018, albeit a mild one: 1) industrial production and manufacturing PMI weakens in majority part of the world (except Brazil and Indonesia, among others) 2) emerging markets equity experienced an outflow and major correction, which later on reverberated to the U.S. 3) U.S. high yield bond spread blew up in Q4 4) inflation is trending lower due to lack of consumer and investment demand all over the world, except for countries that were having a BoP crisis: Turkey and Argentina 5) Automotive and housing are trending lower, as durable goods demand trended lower.

The reason 2018 does not feel like a real crisis could be attributed to several factors: 1) tax cut in the U.S. that soften the blow from weakness in demand 2) better post-2008 regulation in the banking system that reduce the risk of systemic default (looking at you, leveraged loan) 3) Accumulation of risk in the private market that smooth over the cycle (less pronounced boom-bust in credit cycle). The last argument is particularly important.

It might sound crazy for people to think that we are having “recession” when unemployment is at record low around the world and GDP growth is expansive. However, the possibility that these arguments will prolong the expansion cycle are worth thinking.

We also still favor EM equity over U.S. as the risk premium on EM equities are significantly higher than both its U.S. counterpart and historical average. Twelve months out, our base scenario is for EM equities to outperform U.S. in a rally, VIX to stay low with intermittent spike, gold and copper price to rise further, DXY to fall and other G7 currencies to strengthen.

Our tendency for global fixed income portfolio remains long duration on Emerging Markets government bonds as the real yield of these markets stay at an elevated level. As the weakness in global manufacturing becomes clear, government bonds all over the world have been rallying sharply in March. All our long EM bond recommendation in January (Mexico, India, Indonesia, Colombia) has played out nicely so far. This month, we maintain our positive view on India and Indonesia, but switch our Mexican and Colombian bond into Brazilian and South African government bond, due to cyclical factor.

On the G7 front, we think U.S government bond still has some room to rally due to recent weakness in PCE inflation number. We are forecasting a 1.9% yield on U.S. 10-year bond in the coming months. Short German bund, an unpopular trade, might be a correct one this year as Euro area economy bottoms. Long Italian / short German government bond.

Investors have remained net long on the dollar this quarter at the expense of some EM and other G7 currencies. Speculative positioning on EUR, AUD and CAD seems extremely stretch and due for a mean-reversal. We think that the cycle will reverse in the second half of this year with U.S. economy slowing down and the Rest of the World (ROW) accelerating, which should result in significant weakening of the dollar and strengthening of select EM and G7 currencies.

On the EM space, we like to long TRY, ZAR and MXN as the economic backdrop is improving for these countries. The long position in TRY is imbedded in our positive view on Turkish equity. Two months ago, we introduced our positive view on Argentine assets, which has not play out well as the Peso continue to weaken and MERVAL drop another 20%. BRCA, the central bank, has been raising the LELIQ rates to 68% to stem the outflow and we believe this is enough to compensate for the risk involved. Inflation number, coming out in the middle of the month, will play a crucial role in determining the direction of Argentine assets.

The VS portfolio returned 3.9% in March despite the spike in volatility in the second half of the month as the yield curve inverted, and investors are getting more concerned about the probability of recession. The spike in volatility, however, does not trigger our quantitative models to recommend shifting our position to become long volatility, from our current short position. SVXY, our proxy for short volatility strategy, is also up 2.5% for the month.

After last December’s correction, we do not see that volatility will spike up significantly in the near term, as SPX is still below its all-time high level and majority of investors have covered their net long position on the market, as proxied by fund flow to the SPX. Our base view is that investors currently standing on the sideline will eventually get into the index again and drive the rally in SPX, hence keeping volatility low.

Our overweight position on Turkey and Japan have got a mixed result. Japanese market has been flat-to-rising last month and Turkish equity has been badly hit due to intervention in the currency markets. The Central Bank is thought to be intervening in the foreign currency market to prop up the value of Lira, which has been draining the already low international reserves, and the government restricting banks to lend Lira to foreign investors. As a result, investors confidence stumbled along with the currency and stock market. Fundamentally, however, we still have positive view on the market as it is still among the cheapest market in the world and have a constructive view on Lira. Aside from government and geopolitical risk, we think Turkish market will eventually normalize closer to the EM benchmark’s valuation.

Our Global Equity Strategy model still favor both market for this month, and we concur with this decision. Industrial production and PMI numbers are showing a bottoming in the making for Turkish economy, which should bode well for profits. Meanwhile, Chinese reflation effort should also benefit Japanese manufacturing sector and solidify the current trend of rising corporate profits. Both markets valuation is not demanding, with forward P/E of 12.5x for Japan and 6.1x for Turkey, below its historical average. 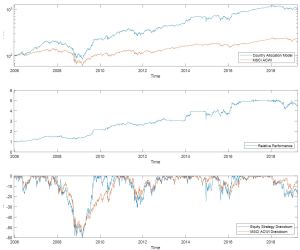 On a whole portfolio view, our model portfolio declined 5.9% this month while our benchmark (MSCI ACWI) is up 1.1%. The underperformance is rooted on the GES model underperformance as Turkish asset, our largest position, was suffering from correction due to damage inflicted by policy mistake. Our risk on/off indicator remained calm last month, highlighting the tendency for investors to stay net long on risky assets. We maintain our bullish view on the market this quarter, as the Fed backs off from raising rates and valuation is still at rational level, an environment that is conducive for risky assets to rally.