Blame it on the COVID-19

Global bond investors have largely benefitted from the COVID-19 scare this year amid plunging global yields led by the U.S. Treasury. The budding signs of reflation beginning late last year have largely dissipated and investors have been running to safe haven assets, with gold price increasing almost 10% year-to-date. The selloff in equity prices globally last week is mainly driven by the rapid spread of COVID-19 outside China’s border, especially in South Korea and Italy, despite the Chinese number of outstanding confirmed cases falling.

The uncertainty behind the COVID-19 spread pattern and government response to contain the virus means volatility is likely to be high in the coming months, at least until April when the weather starts to warm, and contagion become less frequent. In terms of managing portfolio, we are still skewed towards overweighting risk assets, as various financial indicators have been pricing exponential spread for cases outside China, severe downturn in global growth and earnings, while the reality is that in the last three days, the spread in South Korea and Italy has not been as quick. Our base case is that the public fear and containment efforts will limit further contagion in South Korea and Italy.

In the worst-case scenario, where the virus spread further outside China on a similar scale, we think global equity ex-China will sell-off further, but commodity prices will still be well supported. Between today and April, it is highly possible likely that the virus multiply exponentially, as it was the case for China between January and February. Governments are likely to curb air travel and restrict movement inside infected cities, causing a hit on the economy from various sector, such as tourism, restaurants, cinemas, fashion shows and other public events.

The good news is that containment effort in China seems to work and the number of cases has been falling. Chinese economic activity will start to rebound once the government lax the travel restriction and workers return to work in the Hubei province. This is likely to happen in this March, if a second wave of the epidemic does not materialize, which we think will be the case considering draconian measure by the Chinese government in fighting the virus. In this scenario, Chinese factory will start increasing their utilization rate and fulfill the piling backorder demanded by its upstream supply chain across Asia and Europe, a boon for commodity prices. Crazy as it seems, but long Chinese A-Share and short global equity ex-U.S. might be the correct thing to do in this scenario.

What about Chinese credit? Will the halt of businesses in the past two months cause mass bankruptcy across China? Will banks have to provision heavily and suffer through a liquidity crisis? First, the Chinese government has launched several campaigns to soften the blow of the disruption by providing tax incentives, deferral of loan principal payments and cutting the lending rates to support SME. Although no doubt smaller and less liquid enterprises will find it difficult to finance its operations, we think the release of pent up demand in the past two months should soften the liquidity constraint. Second, as more and more companies are back on operation (59% capacity utilization), a strong rebound in manufacturing activity is likely. On a full-year basis, we think output will not contract by significant amount, but rather being shifted from Q1 to subsequent quarters. 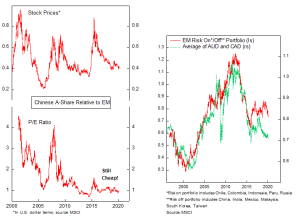 On the service side, we have anecdotally heard stories of bored millennials eager to spend money for outdoor entertainment as soon as the curfew is lifted, which should be a boon for restaurants and other entertainment providers. However, we think tourism industry will have a slower recovery from the outbreak, as the story of Diamond Cruise in Japan will deter people from taking cruises and limit overseas travel until the situation is completely contained.

What to Buy and Sell

Risk asset prices are likely to snap back once early signs of broader virus containment. Commodity producer countries, including Russia, Chile, Peru, Indonesia, Colombia and Australia, are likely to benefit most from the rebound. The U.S., with its stock market capitalization dominated by the less virus-prone tech sector, act as a defensive equity. However, it also has the frothiest valuation compared to rest of world, making it more prone to correction related to increasing risk premia and long-term growth concerns, instead of those related to near-term earnings.

How to Hedge and Until When?

VIX is the worst instrument to hedge the tail risk of global equity selloff, as the U.S. market will likely outperform the rest of the world in a COVID-19 related correction. Moreover, the VIX has shot up significantly and the probability of further escalation is unlikely, even if SPX continue to fall. U.S. government bonds are still the best bet for hedging purpose and concentration on long U.S. treasuries position will continue rising as the scare intensify. However, on a standalone basis, we think the bull in U.S. Treasury is overdone and are against buying at current level. Shun position on IG and HY bonds as well, as the risk/return is no longer attractive and inferior to global equity.

Bottom line: the market is likely to be volatile until April and investors should accumulate risk assets progressively as the scare on COVID-19 tapper off. Twelve months down the road, it is likely that the current correction prove to be an opportunity to snap risk assets at bargain prices. Several early signposts to monitor include decreasing number of confirmed cases outside China, two consecutive days of lower VIX and U.S. 10-year yield getting back above 1.4%.

Is it time to be in bonds or equity? What’s the risk/return profile of global equity and bonds?

We are advocating a 40:60 portfolio currently and expect to increase the risk portion gradually as visibility improves. The global equity prices are set to rise further on the back of monetary easing and pick-up in the cycle across Asian and American countries. We like bombed-out commodity producer countries and value stocks.

Brazil, Russia, Turkey, Mexico, India and Indonesia are all qualified under this category, as growth are faster than its neighboring country, demographic profile is supportive and interest cost has dropped significantly in the past year. The combination of high GDP growth will translate into higher revenue growth among domestic companies. Meanwhile, lower interest cost will result in higher net earnings. Although valuation for India and Indonesia cannot be classified as cheap, but both countries long-term growth and margin profile justify higher earnings and book multiples.

Take currency into consideration. Does it exhibit strong correlation with commodity cycle? If yes, where are we now in the cycle?

The key of investing in EM and European equity is to manage the currency volatility among these countries, which has largely offset the gain in earnings in the past decade. We think Turkish Lira and Mexican Peso are undervalued and investors would benefit from having unhedged equity exposure. As we have stated above, we are bullish on commodity prices for the next decade, as EM and African countries are likely to build massive infrastructure projects to drive growth higher and become the

Currently, the market is pricing a dramatic global slowdown from the COVID-19 containment effort, similar to the expectation of 2008 and 2016 growth slowdown. Whereas monetary policy could help in combatting the downturn resulting from demand shock, the current situation is more complicated as employees reduce their consumption due to lockdown or wage cut and businesses unable to resume production normally, reducing profit and adding pressure to employees. All this happen despite risk-on sentiment that rebounded in the second half of 2019 as the global economy slowly recover.

What the Economic Data Shows

As the February data rolled over, we are expecting significant contraction in PMI data for both services and manufacturing for Asian countries. The containment effort will hurt the economy for another two to three months, but global risk assets will rebound soon as the virus dissipated globally. Investors need to keep on monitoring signs of reflation across the world and look for signs of decreasing confirmed cases outside China.

What is the Expected Future CL95%?

We are putting the chance of strong rebound by March at 65% and 40% chance of another 5% correction on global equity. However, we are against catching a falling knife and looked for signs of bottoming from prices before getting back into equity.

Where is the Opportunity? At What Risk?

We favor countries with overstretched correction and trading cheap, those with improving profitability, or both. Below is the list of countries under our global equity monitor. Russia, Turkey, Austria, Colombia, Italy, Chile, Mexico and Philippines are especially attractive as these countries exhibit the combination of average or higher profitability and are trading at a cheaper valuation. For EM countries, the risk lies more in the currency rather than the stocks itself. Strong dollar and risk off sentiment will create a double whammy for dollar-based investors, but also mean that these countries are likely to benefit most when the panic abates.

How to Allocate to the Portfolio?

We are gradually adding equity into the portfolio, but we think it is too early at the moment. As stated above, we are monitoring three things as early signposts of recovery: decreasing number of confirmed cases outside China, two consecutive days of lower VIX and U.S. 10-year yield getting back above 1.4%.